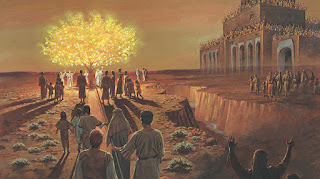 I'm participating in a 90-day BoM challenge and thought I'd post some of the thoughts I've been sharing in the Facebook group I've joined for this challenge. I'm adding some other thoughts that are coming as I'm copying and pasting, and as such, am realizing that I could spend days on just clusters of verses...so these are just a few of the thoughts that have come and/or that I want to record from past reading experiences.

This is more for my own record-keeping and personal study process than anything else....

I love 1 Nephi 1:20. It's one of my fave scriptures. When Pres. Hinckley challenged us to read the BoM several years ago, this was one of the themes I studied. Nephi says that he set out to show that the tender mercy, power, and deliverance of God are real. I wanted to see if/how he did that. WOW. This isn't just a theme for Nephi. It's a theme for the whole book. I think this is such a great scripture to begin a new year. I shared this with my kids for our scripture study tonite and challenged them to write tender mercy moments in their journals. I think the more we seek to see and acknowledge and express gratitude and record tender mercies, the more we are blessed with eyes to see. (Also, I think this theme is like a bookend for the BoM -- Moroni's promise encourages us to ponder how merciful the Lord has been. This is key to being in tune with the Spirit.)

I think gratitude will be one of my words for the year. I'm so susceptible to the drama and trauma of mortality, in the news, in social media, etc. I love the power of technology, but I have to guard my spirit and mind against the way the adversary can trap me in a sort of doom-and-gloom mentality. (This comes with anxiety and depression and OCD, too, so there's that.)

I'm reading a book right now that is really touching me and inspiring me in this direction.

"Blessed art thou" -- I have seen this pattern in the BoM -- someone prays, concerned about someone else, and God focuses first on His relationship with that person. (For example, see the story of Alma in Mosiah 26 and the other Nephi in Helaman 1. This is not only evidence of how personal God is, but also shows how to have healthy relationships with others. We can easily be weighed down when others are flailing in their faith. What I see in these scriptural patterns is that God invites individuals to focus first on their relationship with God, to be centered in Him. Others' choices don't affect my relationship with God (or don't have to, or shouldn't). I can find peace if I am at peace with God. And while God hears our prayers on behalf of others, He also doesn't violate agency. This is something I hadn't really understood or seen until I was doing personal study years ago on personal boundaries. And then I realized that God helps reinforce healthy boundaries by keeping each of our relationships with Him so very individual. It's amazing, really, because He can love us all, love us each where we are. He can guide us each where we are. He can validate our personal journeys even in context of our relationships with others. But He does that for everyone, for anyone who will ask. I have seen this. Even when someone has caused me pain, I can see how He works with them as lovingly and perfectly as He does with me. When I realize this mercy and how personal it is, it helps me respect others' agency and respect their personal process more wholeheartedly.

I also love the verse about how Laman and Lemuel murmur because they didn't understand God and His dealings. On the other hand, Nephi was focused on God's mercy and love. Gratitude can impact our lens and how we see life. (There it is again! Gratitude!)

One more share that came to mind as I was reading back over some of this chapter in the temple. I had S. Michael Wilcox as a BoM instructor in college and he taught us how to look at words, phrases, and verses and really study them. A few years back, I did this with the word 'tent.' It was an amazing experience and I thought I'd share again here. I'm noticing now as I look at the pattern that there is more I could study in the Old Testament (which, of course, makes sense). I love seeing how the Old Testament is so evident in the Book of Mormon. So is the New Testament. The Book of Mormon is not only Another Testament, it's a book that bridges the Old and the New.

Laman and Lemuel are convinced, for a time, with words, but their hearts aren't in it. They are full of the fear of man, prone to murmuring as their go-to response. The contrast with how Nephi testifies of God's power in later chapters is so important. More thoughts below, including on how I think Laban and Lemuel reflect part of all of us as mortals. The natural man is an enemy to God, and we each have our natural-man responses to hard things.

I love how Nephi calls upon the stories of the children of Israel to strengthen and confirm his faith and trust in God. As mentioned below, this pattern of noticing and trusting in the mercy and deliverance of God as evidenced in the scriptures is a key to us having strength, not murmuring, and being blessed to have the revelation we need to get through life.

The story of the children of Israel coming out of Egypt is one of my all-time favorite stories as well, so there's that....

I also am deeply touched by Nephi's wrestle with the Lord. The thought I have had here is that those who are the exception to God's rules and laws simply don't want to be. But it took three times with the Spirit bonking Nephi over the head, plus a lot of studying it out in his mind, before Nephi would essentially break the law that he knew God had given.

President Benson talked about this years ago:

Had Abraham loved Isaac more than God, would he have consented? As the Lord indicates in the Doctrine and Covenants, both Abraham and Isaac now sit as gods (see D&C 132:37). They were willing to offer or to be offered up as God required. They have a deeper love and respect for each other because both were willing to put God first.

I wish I could find the talk, but years ago, I think it was Elder Holland (before he was an apostle, I believe) who talked about how this story is one we come to so early in the Book of Mormon. Lest I misquote, I won't say anything more but I agree with the notion, as far as it is remembered correctly. :)

But I think we should all fear and tremble in the face of these stories, too. Why did Nephi and Abraham have the faith to do what they believed God commanded them to do? Because they knew His voice. They KNEW what the Spirit felt like. They had enough experience to know revelation.

Maybe it's because the older I get, the more of my human weakness I see and feel frustrated with (I suppose I thought that by age 40 I'd have things pretty figured out. Ahem.) So I find a sort of comfort in the fact that Sariah struggled. These people were human. It took her a while to trust. And sometimes that is just where we are. Lehi didn't berate her; he just testified of what he knew was true.

But Sariah gets her answers in her own time and way, and then as far as I can understand the text, they both, as husband and wife, offer sacrifices (note how Nephi's voice shifts from first- to third-person in vs. 8).

I think there is another message here, too. If you have family members or friends who struggle, don't give up hope. Just as God says elsewhere, if they seek God, He will respond. This is all about agency. (This shows up in a powerful way in Enos, as well as in scriptures mentioned above when talking about boundaries and agency.)

I love the threads that appear in chapters 6, 9, and 19. Nephi makes his purpose so clear, and makes it clear that it is not HIS purpose, but God's. God is the author. Nephi was the instrument.

I sometimes think we look at Laman and Lemuel as the 'they' -- people we'd never be like. I think this story contrasting Nephi (one of my heroes) and Laman and Lemuel is really more a story about each and all of us. This chapter reveals some of the things we mortals can do. We forget what we have seen. Sometimes we don't hearken to the Lord, either because of pride or sometimes just because we're mortal and weak and trying to figure it out. We get angry when people speak truth or cut to our cores somehow. We murmur rather than gratefully noticing and remembering and watching for tender mercies. We think that other forces are more powerful than God...we forget that the Lord is able to do all things. I know at least I forget. My fears and worries can sometimes make me more like L&L than Nephi. I actually feel compassion for them, and soberness so that I can be aware of my own fallenness and weakness. (see also Helaman 12)

I love the two words "fell down." That is one of the differences the text mentions about those who actually stay at the tree, and those who are drawn away. Given the fact that these words show up elsewhere in the scriptures, I take this to mean that they fell down in worship of the Savior. The tree represents Him after all. It's fun to do a word search and see where else those two words appear. Some of the verses I have written in my scriptures include the following:
I've also been thinking about false accusation and how hard it can be to not absorb the words of people who mock -- either religiously or personally (bullying, etc.). v. 33 has such a simple solution: "we heeded them not" and vs. 34 explains the danger of not having such a guard up: "For as many as heeded them had fallen away." I think this is true both in terms of our faith and also just in terms of discerning who may not be voices to listen to in our own lives. I've often been too prone to being 'open to feedback' of those who had no concern for me or my well-being. I've discovered that this can send me into mists as much (if not more than) religious mocking can. It's taken years to learn this, but I'm getting better
Posted by Michelle at 12:06 AM